TotalStart's hunt for the 20 groomable entrepreneurs to be mentored and hand-holded to be successful in our 2 year program is on for the next 5 months with 5 more StartUp BootCamp workshops to be conducted at TotalStart Sikkim Innovation and Incubation Center.

Please write to Tenzing Barphungpa at tenzing.barphungpa@totalstart.in or send email to secretariat@totalstart.org for attending the hands-on workshops to set yourself in the path of becoming a small scalable entrepreneur. FOR CLARIFICATIONS PLEASE CALL  +91 9732390003 or +91 9749077674

WORKSHOP PARTICIPATION FEE: RS 1000/-
(AS WE ONLY ENTERTAIN SERIOUS PARTICIPANTS WE HAVE KEPT A NOMINAL PARTICIPANT FEE FOR SERIOUS SEEKERS OF ENTREPRENEURSHIP PATH)

TotalStart Sikkim Innovation & Incubation Center, the local operation of TotalStart Entrepreneurship Ecosystem Developers, a section 25 not for profit company focussed on developing entrepreneurship ecosystem in entrepreneurially less developed regions in the country launched at their Innovation & Incubation Center at Software Technology Parks of India Gangtok on 5th March 2015 the "TotalStart Sikkim StartUp BootCamp 2015" where "TotalStart Sikkim District Innovation & Incubation Unit" was inaugurated by the Hon'ble Member of Parliament of Sikkim Shri P D Rai. Shri P D Rai also declared in this StartUp BootCamp seminar/workshop that Sikkim Government is going to kickstart in the next 6 months a very focussed and integrated program for developing Startup Entrepreneurs in the State spearheaded by the Dept of Commerce & Industry. He also advised TotalStart Sikkim to play an important role in the state program by plugging in with their own focussed effort to develop 20 "small but scalable startupreneurs" annually through their 2 year integrated "TotalStart Business Mentoring Program".

Dr Suryanil Ghosh, Chairman of TotalStart, shared his thought that District Industry Centers (DIC) under the Dept of Commerce & Industry is an excellent infrastructure built by any state government, which can play an extraordinary role if properly boosted, equipped and supported by other entrepreneurship development focused organizations in the state and suggested that all efforts to be brought together by all stakeholders of entrepreneurship development in the state to support the DICs under the Department of Commerce & Industry.

Shri P D Rai also enunciated on four key points to inculcate the spirit of entrepreneurship amongst the young entrepreneurs of Sikkim who were present there. Amongst them: zeal to achieve something with fire in the belly and honesty & sincere hardwork stood out.

The StartUp BootCamp seminar/workshop was well represented by all the major stakeholders in entrepreneurship development efforts in Sikkim. Shri Manabendra Mishra GM RBI presided over the brainstorming session amongst the stakeholders of entrepreneurship development in Sikkim. The other participants in the brain storming session were Mr Pulger Jt Secretary of Commerce & Industry Department, Mr S K Pradhan GM DIC East & North, Mr S K Basu Director MSME-DI, Mr Nabin Kumar Naik Director Nehru Yuva Kendra, Dr Arjun Adhikary a senior entrepreneur from Gangtok, Professors from Sikkim Manipal Institute of Technology, Mr Madhusudan Das, Director RSETI, SBI, Mr T Samdup Jt Director IT Dept and Dr Nihar Mohanty Head of STPI Gangtok also co-host of the program. What prominently came out from the discussions is that Sikkim State is a very active social program oriented state with government playing a major role in the development of people and supporting their needs. So the entrepreneurial spirit is lost amongst the youth as they get easy options and opportunities where they become complacent and work towards mostly getting government jobs or generally look for only getting a job, and do not seek out a harder but more rewarding path of becoming an entrepreneur.

Two more workshops were conducted on 23rd and 24th April in Jorethang & Gangtok. 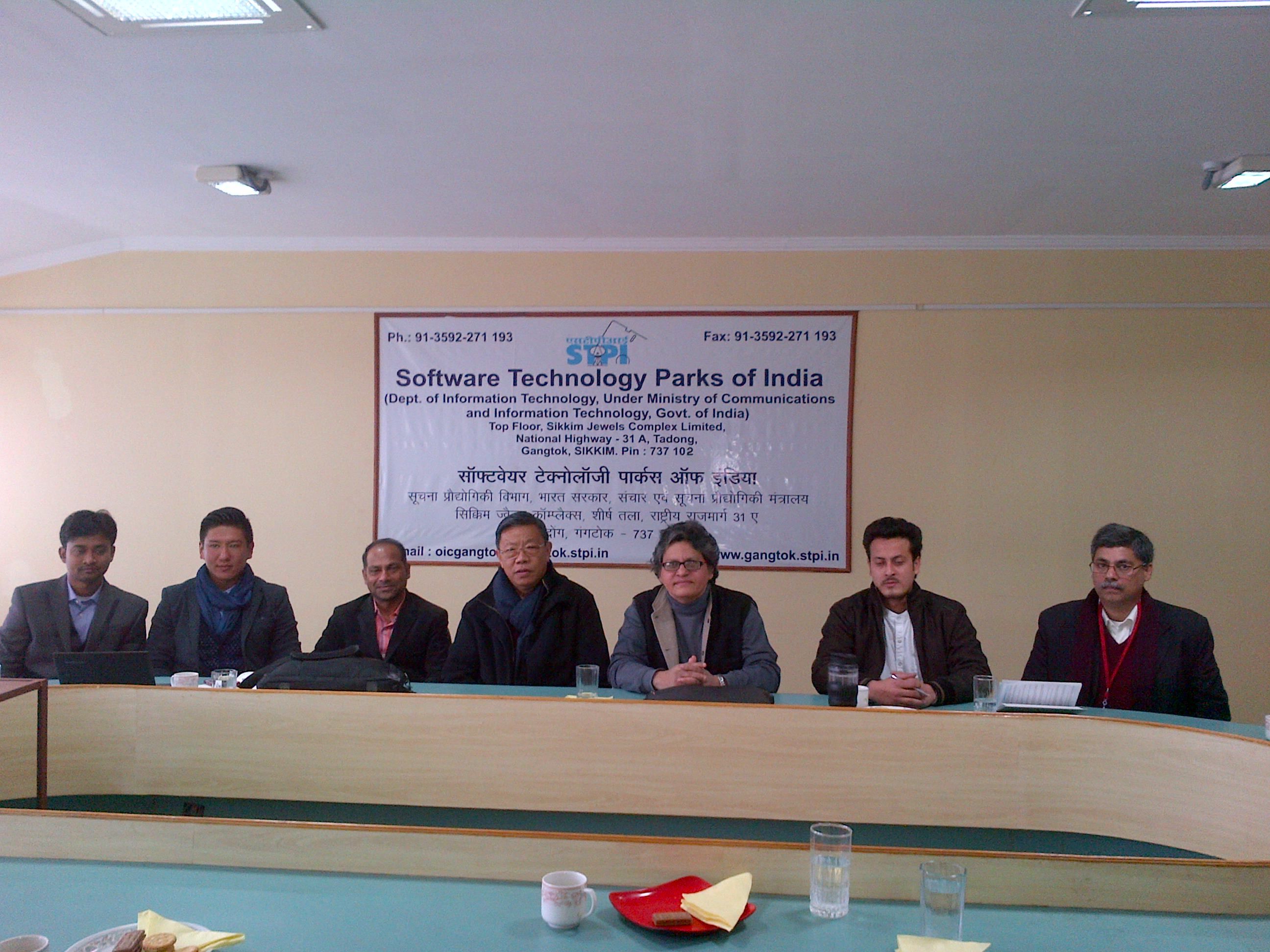 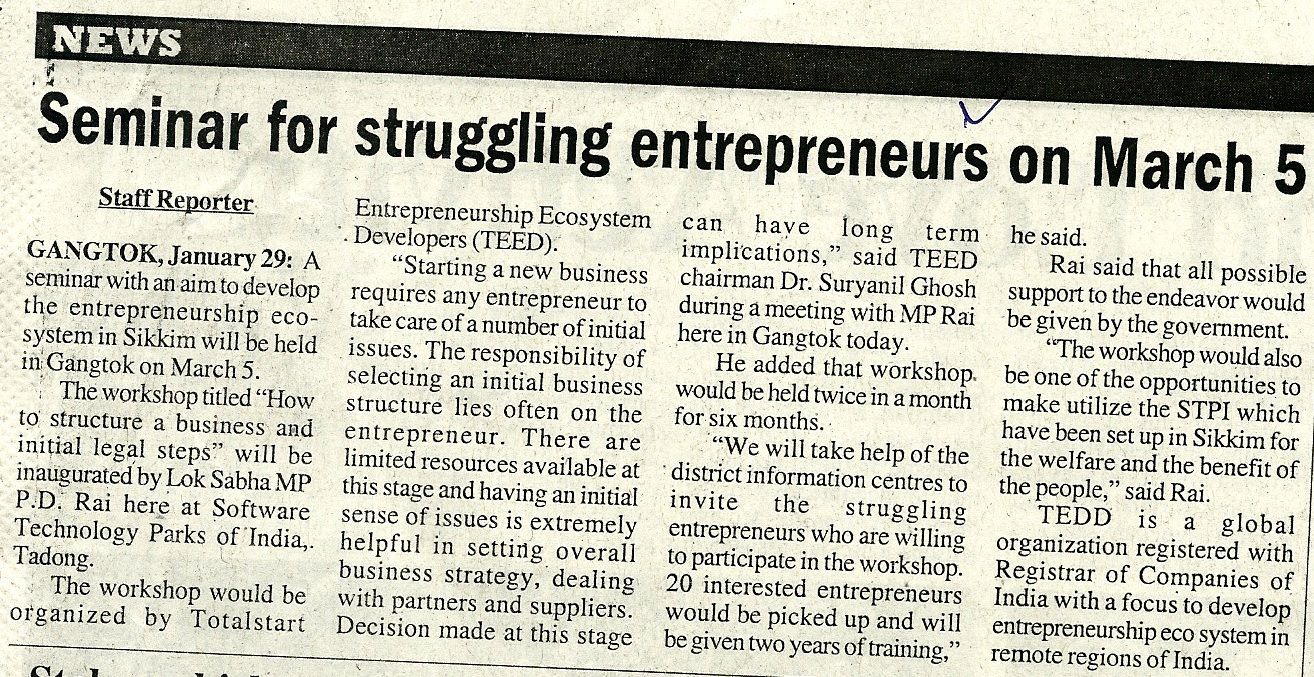 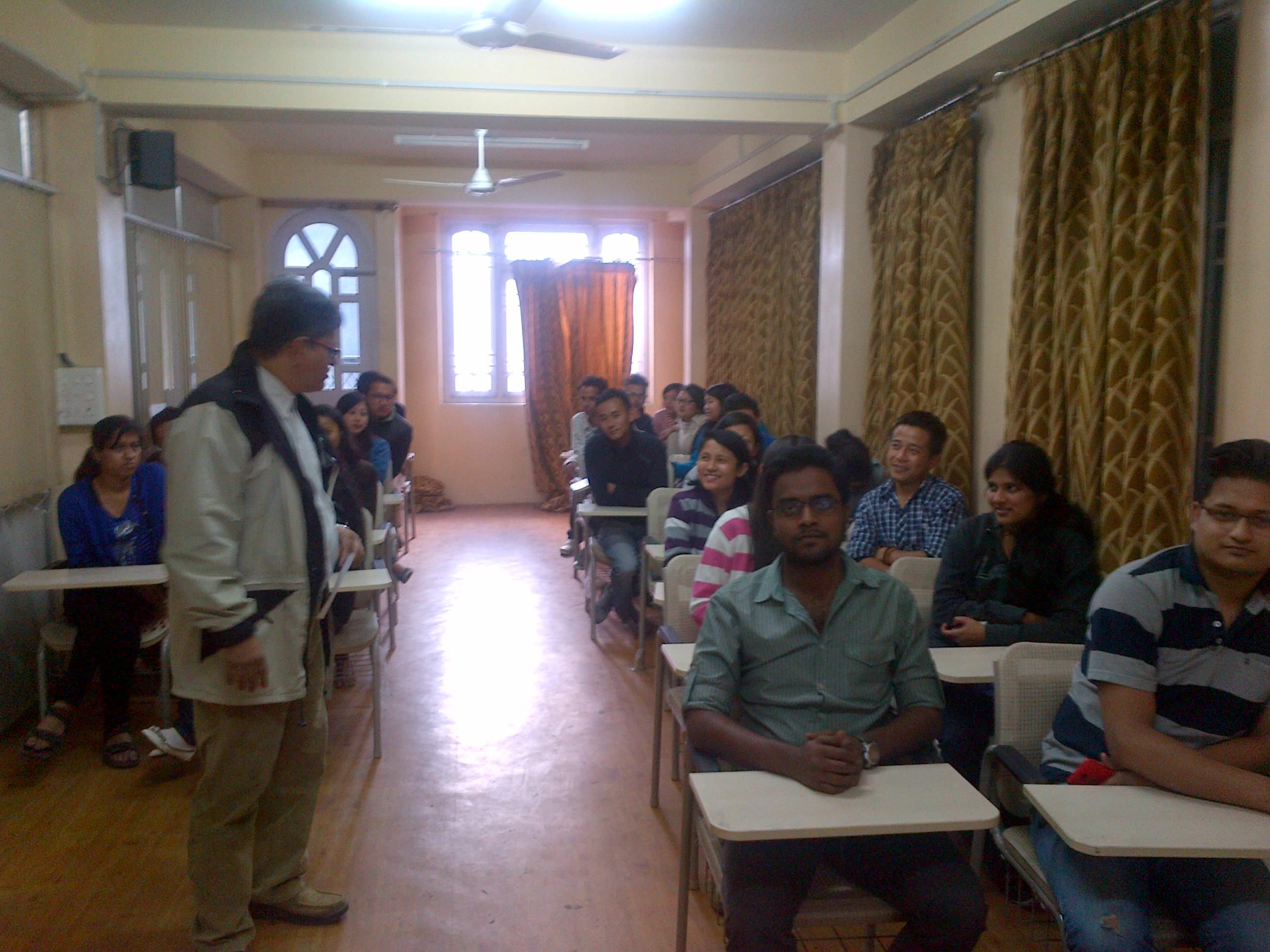 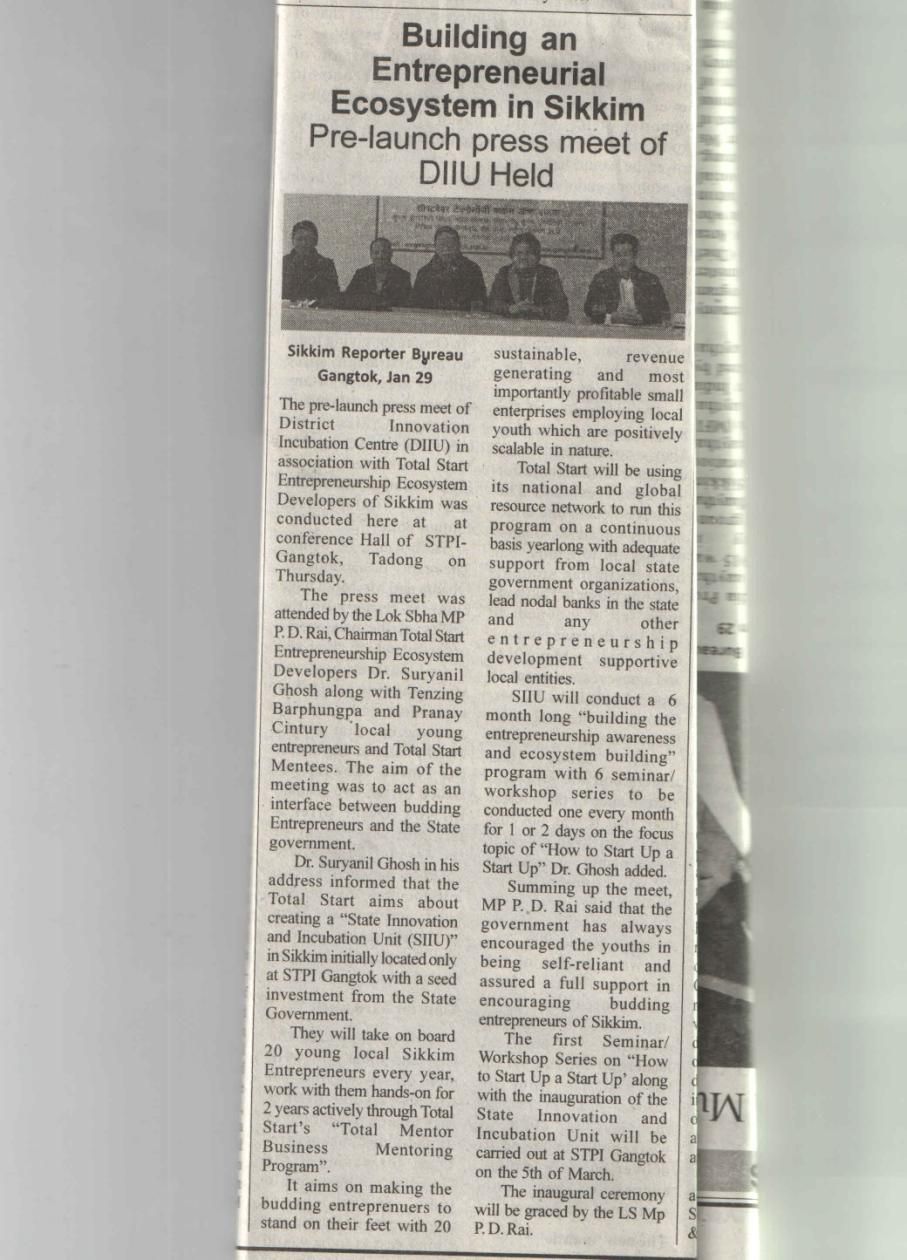 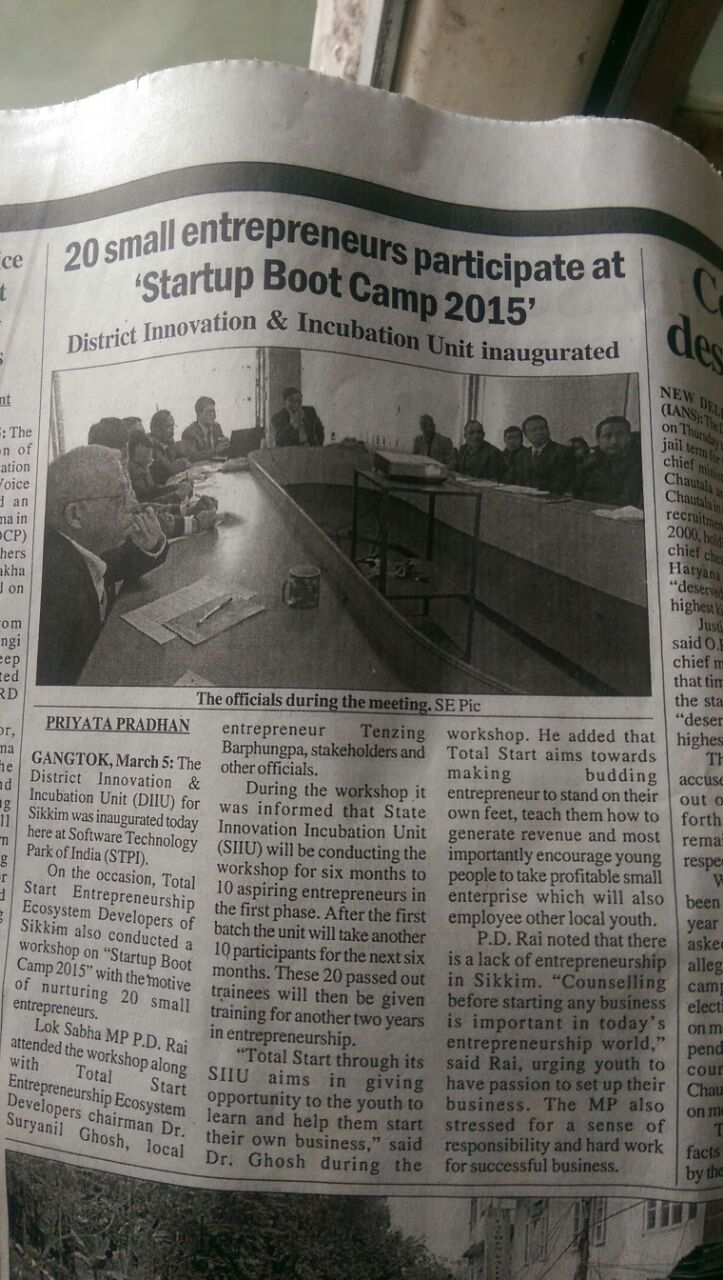 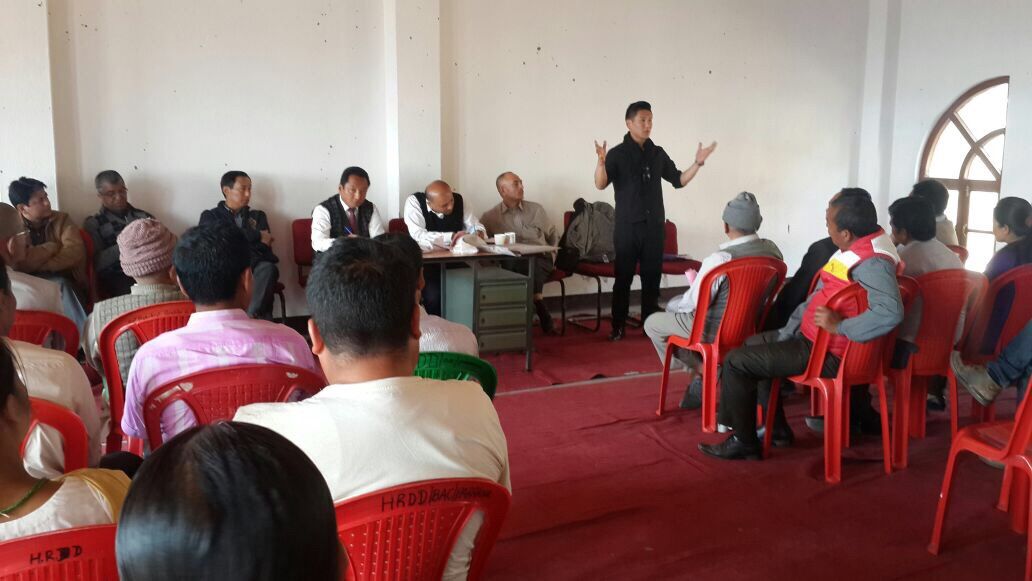 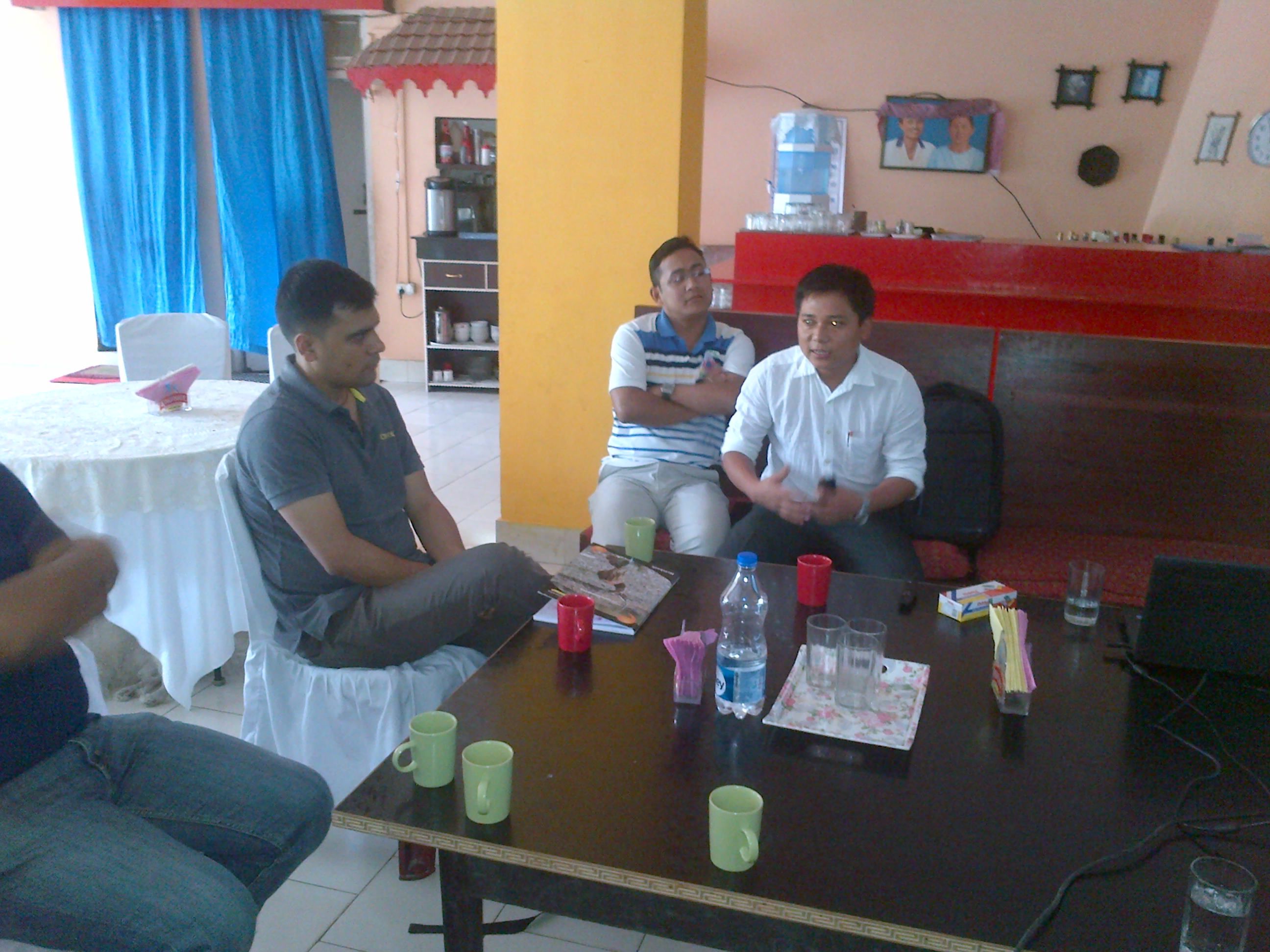 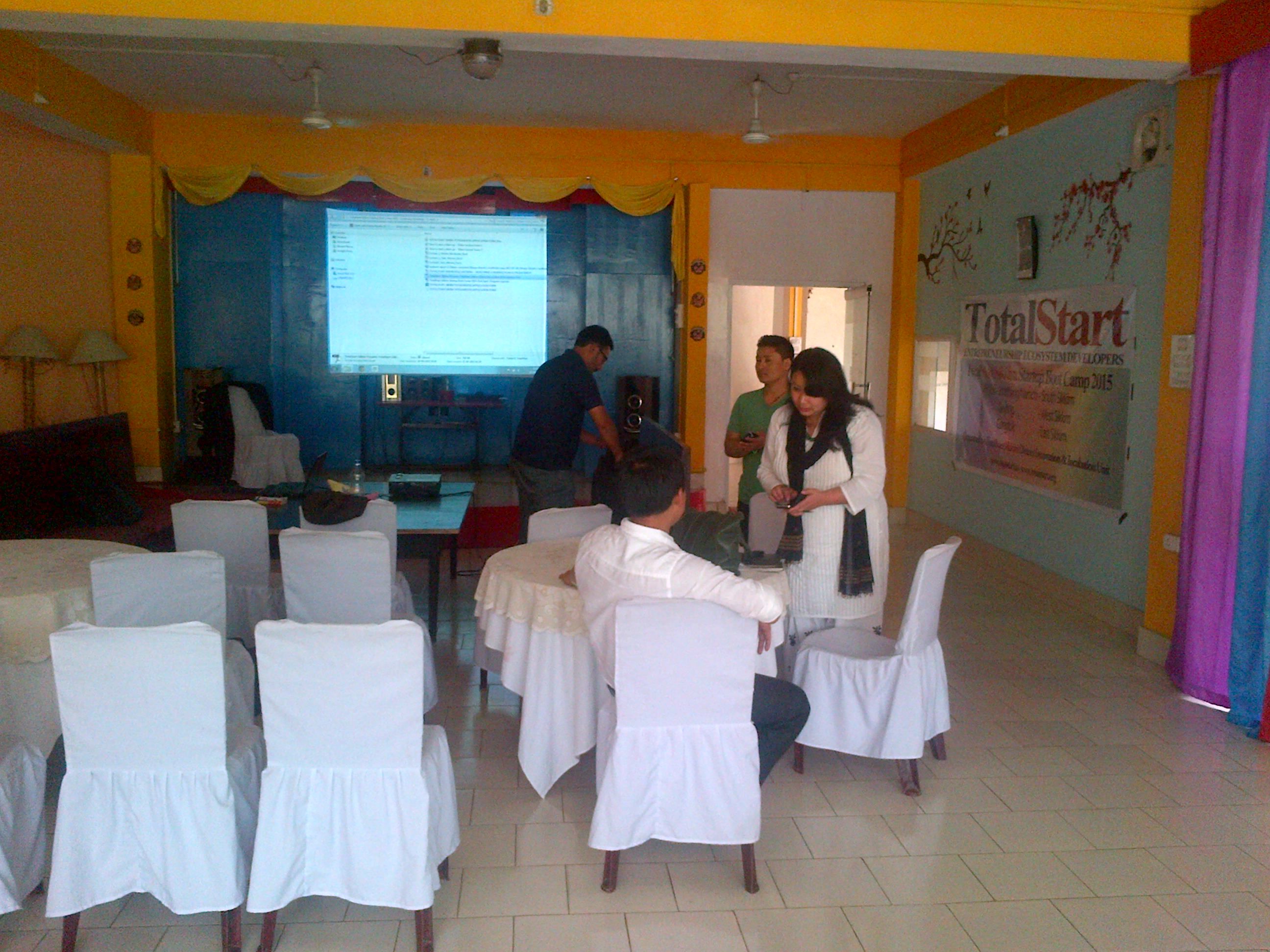 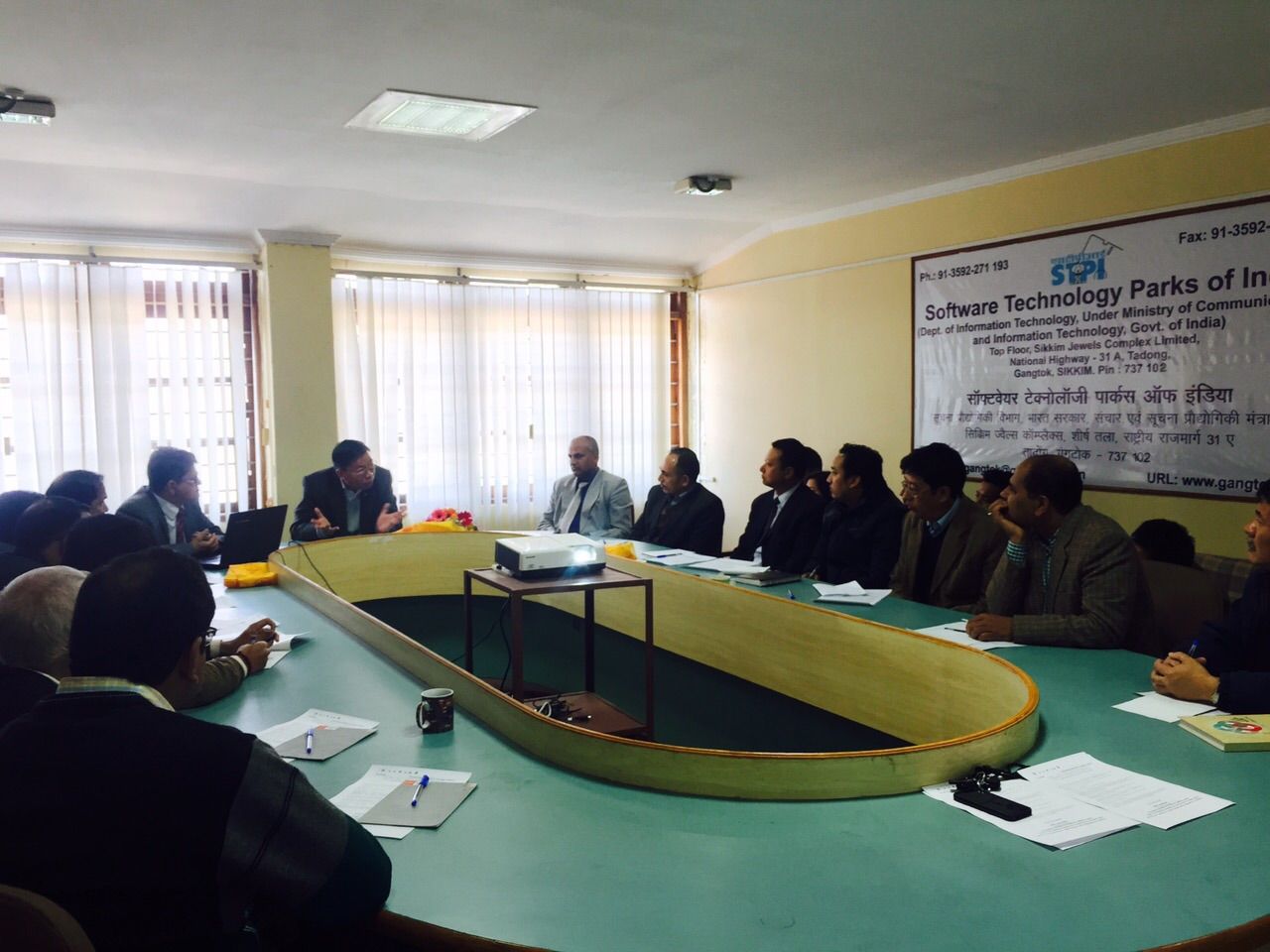 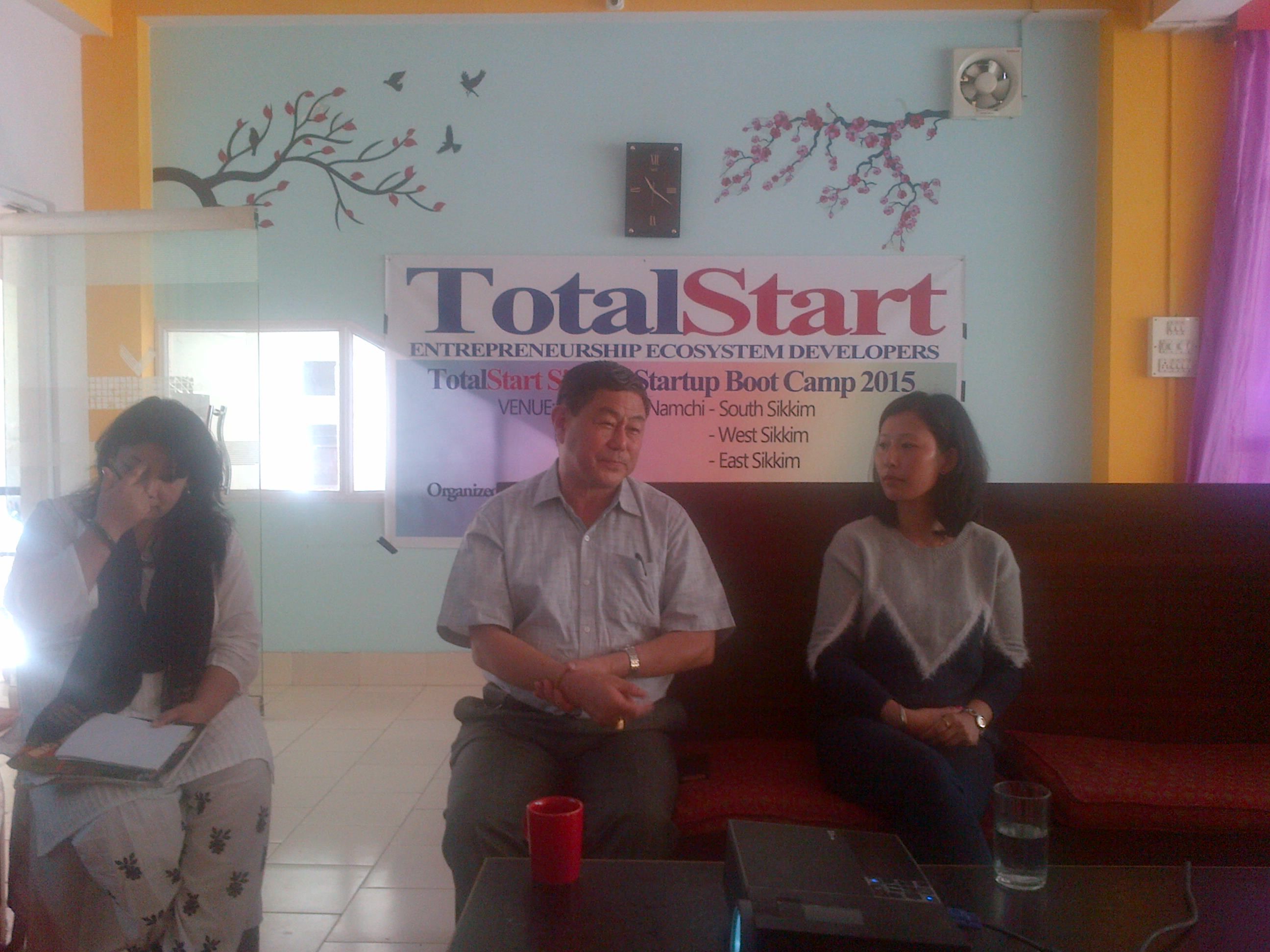 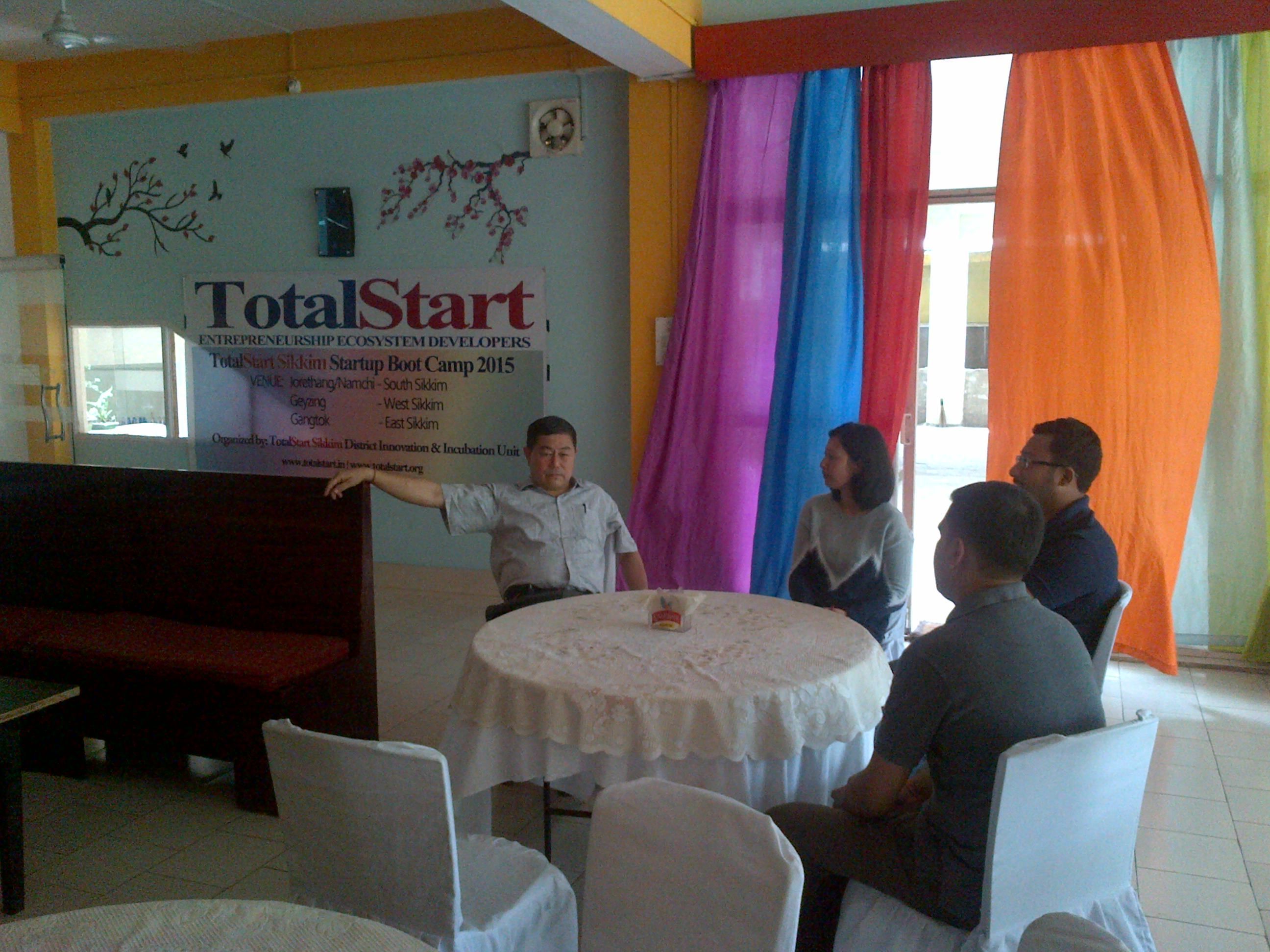