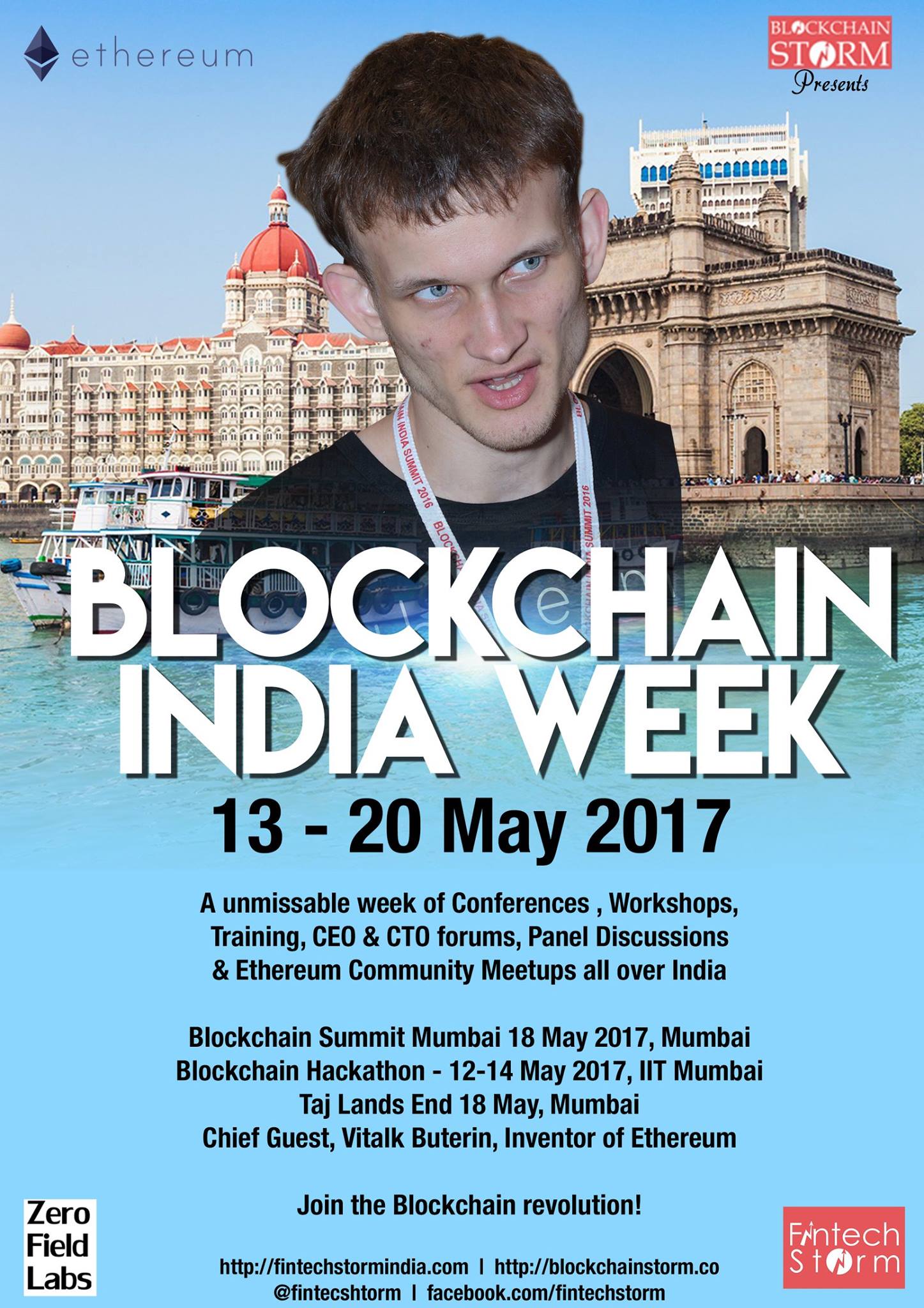 The Legendary Young Genius who continues to define 1. the future era of computing & business and 2. the modern economics - the creator of imagination-defying invention called ethereum - the blockchain for everything, and the new world computer no less - the Ethereum Virtual Machine.

Oh to be young, bold, fearless and a genius!!

The next Trillion dollar opportunity that will boost Indian economy? â€œ

with the youngest geniuses, most influential thinkers , movers and shakers , talent force of tomorrow in Blockchain

Register here for the Summit on 18th May 2017: http://blockchainstormethereumindiasummit.eventbrite.com

The land where mathematics was born - India Welcomes you!

Why this is important for businesses around the world.

1. The Mega trends unleashed by Blockchain

Vitalik to announce and give away prizes to Hackathon winners

Buterin was born in Moscow, Russia and lived in the area until the age of six when his parents emigrated to Canada in search of better employment opportunities. While in third grade of elementary school in Canada, Buterin was placed into a class for gifted children and started to understand that he was drawn to math, programming, and economics. He also had the ability to add three digit numbers in his head at twice the speed of his peers. In 2012, he obtained a Bronze Medal in the International Olympiad in Informatics. He attended the University of Waterloobut dropped out to work on bitcoin full-time.

In September 2011, Buterin would accept to be the first co-founder and contribute as a leading writer to a new publication called Bitcoin Magazine.

In addition Buterin had written about bitcoin-related topics for other publications, including Bitcoin Weekly. Bitcoin Magazinein 2012 later began publishing a print edition and has been referred to as the first serious publication dedicated to cryptocurrencies. Bitcoin Magazine was then purchased by BTC Media, where Buterin continued to write until mid-2014.

In addition, he held a position on the editorial board of Ledger, a peer-reviewed scholarly journal that publishes full-length original research articles on the subjects of cryptocurrency and blockchain technology.

He is a co-creator and inventor of Ethereum, described as a â€œdecentralized mining network and software development platform rolled into oneâ€ that facilitates the creation of new cryptocurrencies and programs that share a single block chain (a cryptographic transaction ledger).

Buterin has contributed as a developer to other open source software projects. Some early examples are: Kryptokit, pybitcointools, multisig.info, and btckeysplit. He also contributed to DarkWallet by Cody Wilson, Bitcoin Python libraries, and the cryptocurrency marketplace site Egora.

She has worked with two suisse banks Credit Suisse & UBS.

She currently advises Government of India on infrastructure financing.

Andrew Keys, of ConsenSys, which is part of Enterprise Ethereum Alliance, brings capital markets, technology, and entrepreneurial experience. Previously, Andrew worked for UBS investment bank in equities analysis. Later, he was responsible for creation and distribution of life settlement products to hedge funds and investment banks. After, he co-founded a revenue cycle management company where he learned about Bitcoin and eventually Ethereum.

Andrew graduated from Loyola University Maryland and the University of Auckland with degrees in economics and international finance.

Richard Knight is part of the Microsoft Global Black Belt team in Asia enabling Customers in their digital transformation journey to move to the Cloud using the capabilities of Microsoft Azure with a focus on new technologies and services. Lately, Richard has also been working with Customers, Partners and Startups to develop and build out use cases in the distributed ledged and blockchain space across industries from financial services to supply chain management.

Mr. Rahul Bhasin serves as the Chief Executive Officer, Managing Partner and Managing Director of Baring Private Equity Partners (India) Ltd. He joined Baring Private Equity Partners in 1998. Mr. Bhasin serves as Senior Partner at BPEP International Limited. He worked for eight years with Citicorp, ending his tenure as a Vice President of Asset Management. At the time of leaving Citibank, Mr. Bhasin was the Fund Manager of Citibank Global Asset Management and was involved in asset allocation on a sectoral and regional basis for Citibankâ€™s global portfolio. He was the Fund Manager for the Citibank Emerging Market Funds and has actively invested in the equity markets in Latin America, Eastern Europe, Russia, Asia, and India.

Prior to moving to London, Mr. Bhasin was in charge of the Treasury. Aside from his experience in the developed markets, he actively invested in the emerging markets in Latin America, East Europe, Russia, Asia, and India. In addition to equity markets, Mr. Bhasin has also managed a portfolio of derivative securities in the developed markets. Mr. Bhasin serves as the Chairman of TexWorld.Com Inc. He serves as an Advisory Board Member of the ING group in India. Mr. Bhasin serves on the boards of Secova eServices Limited, RMZ Corp., Sphaera Pharma Pvt. Ltd., Auro Mira Energy Company Private Limited, and Integra Software Services Pvt. Ltd. HMr. Bhasin serves as a Global Board Member of BPEP International Limited. He has been a Director of MphasiS Corp. since June 1998. Mr. Bhasin served as the Chairman of Mphasis Limited and oversaw its transformation from a loss making to a profit making company. He served as a Director of Inditrade Capital Limited (formerly JRG Securities Ltd.) from October 30, 2007 to February 13, 2014. He served as a Director of Mphasis Limited from 1998 to September 14, 2007. He served as Non Executive Independent Director of Hindustan Oil Exploration Co. Ltd. from April 20, 2006 to October 3, 2008 and Secova, Inc. He was a Director of Cethar Vessels Limited till April 10, 2014. Mr. Bhasin holds an M.B.A from the Indian Institute of Management, Ahmedabad.

Dimitri co-invented SPOOL, one of the first protocols for intellectual property on the bitcoin blockchain. Having traversed the engineering space from the electron level at analog nanometer transistors to cloud platforms, Dimitri has in-depth knowledge about:

Currently, Dimitri is working as a full-stack engineer on BigchainDB, merging big data with blockchain. He is also a co-chair of the W3C Interledger community, a protocol for connecting blockchains. Here he works on the core protocol and co-developed cryptoconditions, a verifiable alternative to smart contracts.

More Speakers to be announced soon..

Want to sponsor or exhibit at the most though-elevating day

you will see in the electrifying financial capital of India, Mumbai?

Get in touch today!

See our past events at http://fintechstorm.eventbrite.com

The question is â€“ â€œWhat will you be in the Blockchain enabled world?â€

This event is brought to you by Zero Field Labs

No matter which industry you belong to and what your blockchain needs may be, Zero Field Labs can help.

Come explore how your business strategies, products and services will look like in the blockchain enabled world?

Which companies should showcase at this Forum?

Some companies showcasing at this event are : Microsoft, Consensys, Ethereum

Any company that wants to support the Blockchain eco-system

Blockchain and the future of banking & financial services

We are committed to creating and connecting the Blockchain Inventor Community in Europe.

If you are an European Tech Co. or a Blockchain startup looking to make headway into Asian markets

or to strike partnerships or to learn to navigate the Banking, Payments & Fintech landscape

Mark your calenders for Blockchain India Week 13-20 May 2017, Mumbai

to reserve your spot in the European delegation going to India!

How to stay updated with Fintech Storm future events?

Signup for one of our events or see past events : http://fintechstorm.eventbrite.com

Anyone interested in learning more about speaking, sponsorship opportunities: 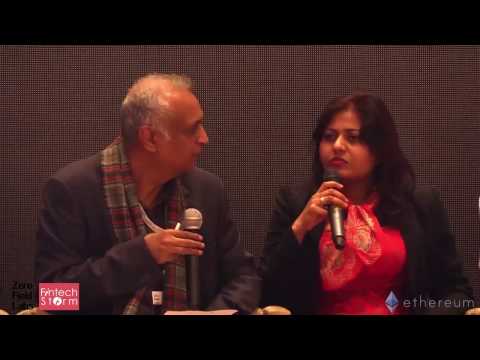